The Papahānaumokuākea Associated Cetacean Ecology Survey, or PACES, got underway on 7 May 2013 aboard the NOAA Ship Oscar Elton Sette.  The PACES team consists of 13 scientists who are carrying out seven integrated operations to collect data on the abundance, distribution, stock structure, and habitat of cetaceans in the Papahānaumokuākea Marine National Monument (PMNM).  These operations include visual observations, acoustic monitoring, photo-identification, biopsy sampling, satellite tagging, small boat surveys, and oceanography.  We are particularly interested in learning more about the Northwestern Hawaiian Islands stock of false killer whales, as well as other species that likely also have discrete stocks within the PMNM.  We arrived at the PMNM boundary mid-day on the 8th, and as you can see below, have been busy with visual and acoustic detections of cetaceans ever since! 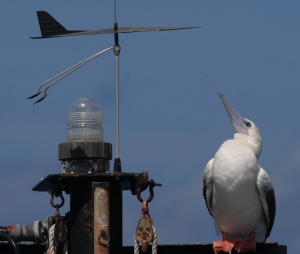 Red-footed boobies landing on, jostling for, and – ahem – “decorating” the jack staff of the Sette have provided much needed comic relief for the visual observers. (photo by Adam Ü)

Through challenging weather conditions (rough seas, cold wind in our faces), the flying bridge crew donned jeans, jackets, and hoods (basically every layer we could find) in order to brave the elements (with the exception of Allan, who maintains that only shorts and t-shirts should be worn when working in Hawaii). After six days of observations in the PMNM, all of the observers are on the board for sightings. A total team effort resulted in 15 sightings of at least eight species dispersed over the six transect lines covered (see map below).  Although there is no dedicated birder effort on PACES, past cruises to the PMNM have been interesting in that there have been no albatross sightings. PACES is taking place in the heart of the albatross breeding season, and it is a treat to see both Laysan and black-footed albatross on a daily basis. 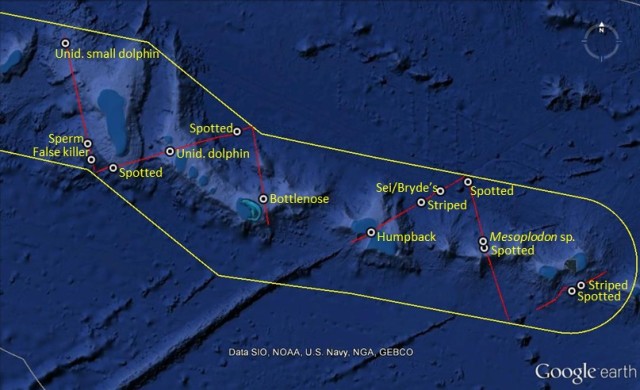 Sightings of cetaceans made on completed tracklines (red lines) during the first week of PACES.

by Yvonne Barkley, in collaboration with Shannon Coates, Patrick Rex and Jenny Trickey

Although equipment issues prevented acoustic monitoring until 10 May, a total of 27 groups of cetaceans were acoustically detected during the first week of PACES 2013.  Known detected species include spotted dolphins, striped dolphins, bottlenose dolphins, false killer whales, sperm whales, and minke whales.  Three groups of false killer whales were acoustically detected, but only one group was within three nmi of the trackline and thus triggered the false killer whale protocol to acquire group and subgroup size estimates.  This protocol involves the acoustics team steering the ship towards subgroups of animals, assuming they continue to vocalize, which allows us to obtain bearing angles and lead the visual observers to the subgroup locations.

We are using a different type of acoustic array, known as the ‘multi-node array’ (see above), which has proven useful in obtaining more precise bearing angles to vocalizing cetaceans.  The multi-node array consists of two separate oil-filled array sections: 1) the inline array, which houses 4 mid-frequency hydrophones, and 2) the end array, which is the same style of array normally used for passive acoustic methods.  A 30 m length of cable connects the inline and end arrays and allows for better localization with an increased distance between localizing hydrophones.  The accuracy of this new array will be tested during an upcoming localization test using the small boat and a playback speaker system to emit sounds from a known location.  The purpose is to test the new array’s localization accuracy by comparing it to the actual location from the visual observers.  We suspect the new array will do very well and hope to perform this test in the coming week. So far, the acoustics team has aided in the sighting of several groups of vocalizing cetaceans, including sperm whales and bottlenose dolphins.

Photos to confirm species identification and document geographic variation in coloration and morphology were taken from the ship of striped, spotted, and bottlenose dolphins, with some of the bottlenose dolphin images likely taken from a close enough distance to allow for the identification of marked individuals (i.e., individuals with nicks and notches on the trailing edge of their dorsal fins).  Weather conditions and animal behavior only permitted one opportunistic small boat launch during week one.  This launch was on a humpback whale sighted off Necker Island.  Unfortunately, the whale was difficult to approach and quickly moved away from the small boat.  Fortunately, the animal made a farewell breach in close proximity to the small boat, allowing small pieces of sloughed skin to be collected for genetic analyses.  A dedicated small boat survey of the nearshore waters of French Frigate Shoals was planned for 11 May, but had to be postponed due to high winds, sea state, and swell.  No satellite tags were deployed during the first week.

by Louise Guiseffi, in collaboration with Robert Spina, Erik Norris and Amanda Bradford

CTD stations from the first week of PACES.

The oceanography team has had a smooth first week of oceanographic sampling.  Conductivity-Temperature-Depth tests (CTDs) were performed twice daily, at sunrise and sunset.  On some days, a CTD was foregone if the CTD station would have overlapped in location with a prior station.  Chlorophyll content was assessed from water samples from every morning CTD and from all surface water samples.  Expendable Bathyothermographs tests (XBTs) were done in conjunction with surface samples at 0900, 1200, 1500, and, when sunset occurred after 1900, at 1800. 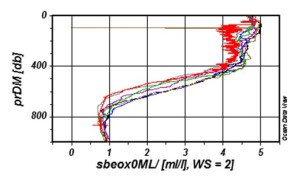 Dissolved oxygen: note the inaccurate readings in the primary oxygen sensor during the first CTD reading (in red) were due to a faulty water pump. 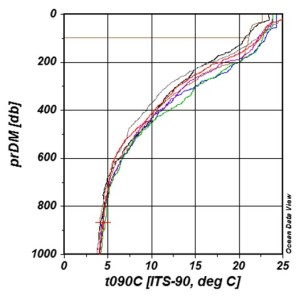 Temperature: surface temperature has been decreasing with our movement northwest.

XBT 7/Surface Sample 7 and XBT 22/Surface Sample 18 were associated with sightings of spotted dolphins, while XBT 8/Surface Sample 8 were performed in conjunction with the Sei/Bryde’s whale sighting.  A faulty water pump threw off the readings from the primary dissolved oxygen sensor when under pressure on the first CTD deployment.  Sette Survey Tech Robert Spina troubleshot and replaced the water pump, resulting in accurate readings in all subsequent CTDs.  BioTech Louise Giuseffi is performing quality control and entering CTD, XBT, and surface sample data daily.  CTD sensor data were plotted in Ocean Data View 4 (ODV), with a subset of the data pictured above and below.

This entry was posted in Protected Species. Bookmark the permalink.