Every summer, on the beautiful island of Guam, the fishing community gathers to partake in several fishing derbies and the Gupot Y Peskadot (Fishermen’s Festival). Helping contribute in each of these events were Eric Cruz, PIFSC Guam Territorial Science Liaison and Anna Regis, PIFSC Database Technical Assistant.

The Department of Agriculture’s Division of Aquatics and Wildlife Resources (DAWR) hosted the first derbies, the 19th Annual Kid’s Fishing Derbies (KFD). The KFD is open to all kids ages 7-12 and is a two hour shore line rod and reel tournament. The first KFD was held on the morning of July 27, 2013. On this bright, sunny day, 18 kids participated and these excited, young fishermen caught a total of 36 fish. The second KFD, on August 10, brought a bit more excitement as it was held at the Ypao Beach Park, which happens to fall within the Tumon Bay Preserve, however, hook and line from the shore is allowed within the law. In this derby, a total of 53 kids participated, but interestingly, only 18 fish were caught. For both derbies, each fish was measured and identified to the family level, then released back into the water as soon as possible. There were a total of 9 place winners in 3 categories for the first derby and 8 place winners in the second derby. However, every participant walked away with a prize, whether or not they were successful in catching a fish. 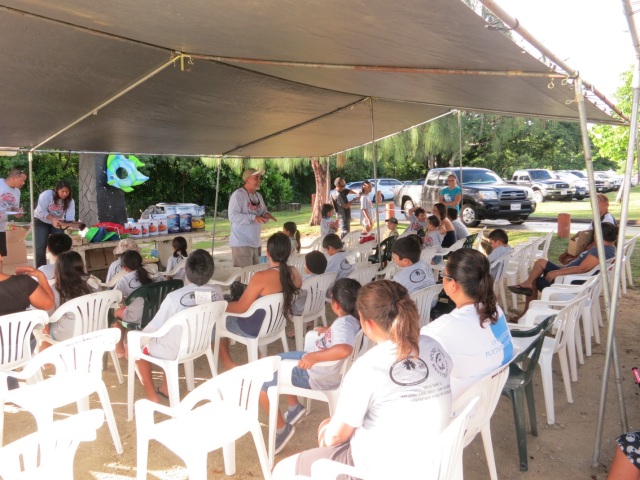 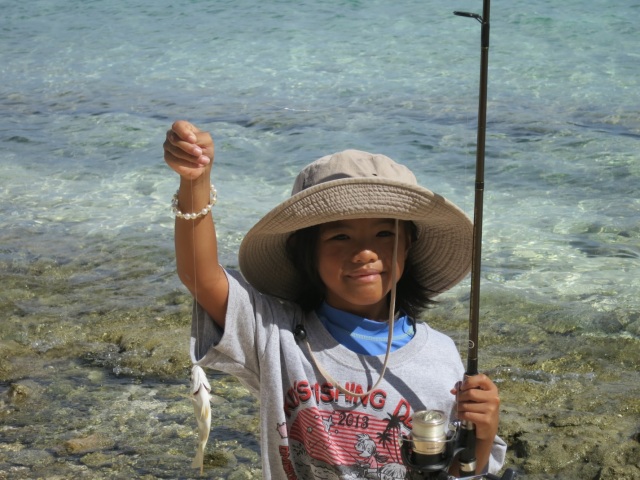 From 6pm on August 9 through 3pm August 10, the Guam Organization of Saltwater Anglers (GOSA) held their 4th Annual In-Shore Tournament. This is also a shore line rod and reel fishing derby. Participants are judged on the total pounds of fish; however, qualifying fish must belong to the Emperorfish family (Lethrinidae), it must be at least 6 inches in length, and it must be alive at the time of check in at the derby station. A portion of the weight was deducted from any fish checked in that wasn’t alive. Lee San Nicolas was the overall winner with 2 fish submitted at 3.5lbs. 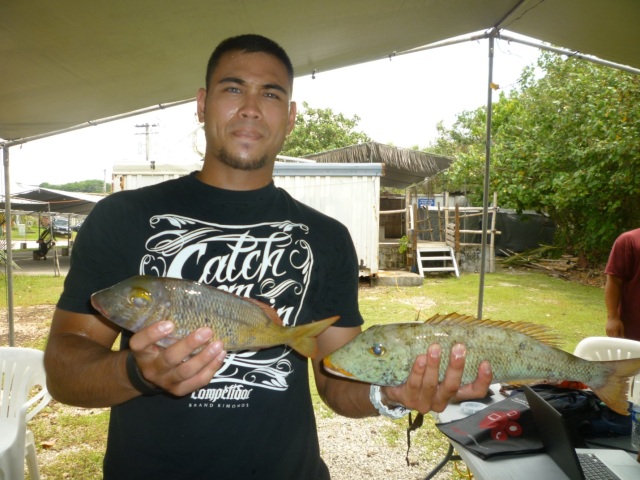 The Marianas Underwater Fishing Federation 9th Annual Marianas Spearfishing Challenge was also held on the August 10, the third fishing derby of the day. This is a two man team, free diving spearfishing derby that requires all participants to dive from a boat. There were 6 categories that the participants were competing in. The open category (heaviest two combined fish) was won by Ken Quan and Gavin Simmons. They submitted a Napoleon Wrasse (Cheilinus undulatus) and a Bluefin Trevally (Caranx melampygus) with a combined weight of 36.25lbs. Carlos Laguana and Napu Castro won the biggest parrotfish (Scaridae) category with a Gibbus Parrotfish (Chlorurus microrhinos) at a whopping 5.2lbs. The Bluespine Unicornfish (Naso unicornis) category was won by Ryan Balajadia and Allen Camacho with a 4lb fish. The biggest rudderfish (Kyphosidae) was a 4.5lb Lowfin Rudderfish (Kyphosus vaigiensis) caught by brothers Sean Nededog and Andrew Nededog. The biggest Orangespine Unicornfish (Naso lituratus) was a 0.75lb fish caught by Chris DeBeer and Peter Green. Every year, the derby features special category, a fish family that serves as the year’s “mascot”. This year’s special category was the Surgeonfish (Acanthuridae). Ray Flores and Mike Cassidy came home with this category with a Yellowfin Surgeonfish (Acanthurus xanthopterus) that weighed 1.9lbs. 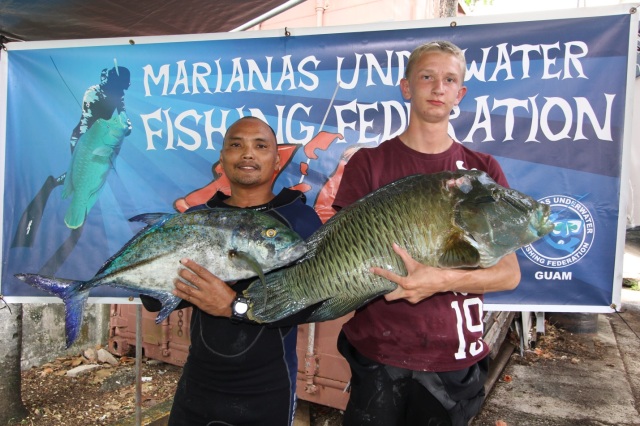 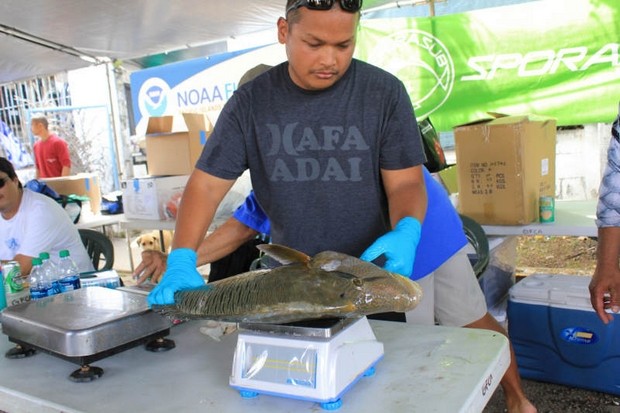 This year marks the 15th year that the Guam Fishermen’s Cooperative Association (GFCA) has hosted the Gupot Y Peskadot (Fishermen’s Festival). As always, the GFCA invited members of the public (not just fishermen) and tourist to their Hagatña facility to enjoy a fun-filled family day with entertainment, marine related informational booths, and various vendors, including food, drinks, and arts and crafts. In addition, the GFCA also provided fish burgers, fish shish kabobs, fish poki, and fish kelaguen. The GFCA also had water, a wine tasting station, and a shaved iced machine available. The GFCA provided all these refreshments free of charge. 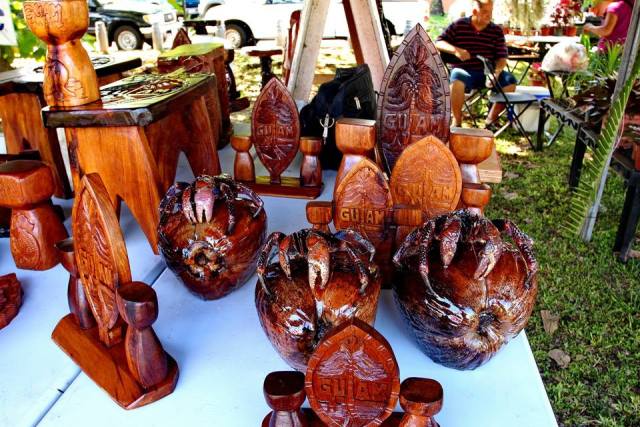 Some of the arts and crafts showcased at the 15th Annual Gupot Y Peskadot. Photo Credit: Edward B. San Nicholas 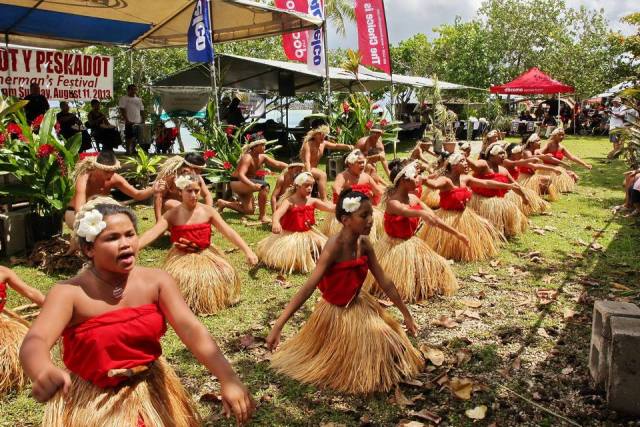 The 18th Annual Guam Marianas International Fishing Derby is the last of the derbies during the summertime. This is the biggest fishing derby on Guam. It’s a two day trolling fishing derby with cash prizes to the top 3 place winners in the five categories, marlin (Makaira mazara), yellowfin tuna (Thunnus albacares), wahoo (Acanthocybium solandri), mahi mahi (Coryphaena hippurus), and bonita (Katsuwonus pelamis). Captain John Hattig and crew aboard the Da’net walked away from this year’s derby as the big winner. They caught the biggest marlin (550.5lbs) and the biggest yellowfin tuna (62.5lbs), both from the same location! 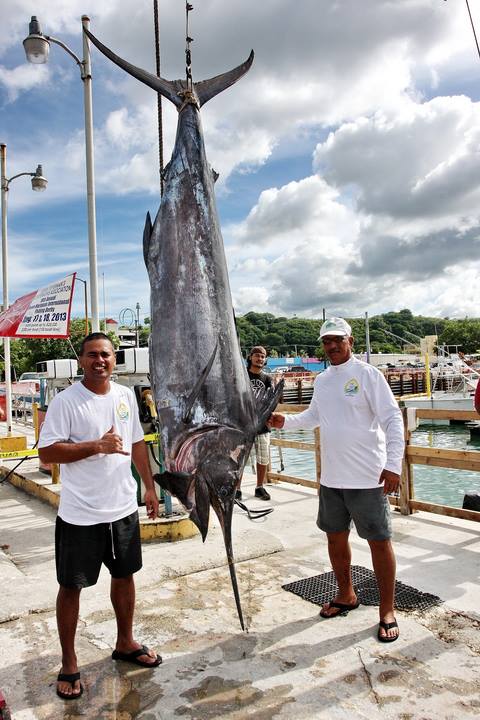 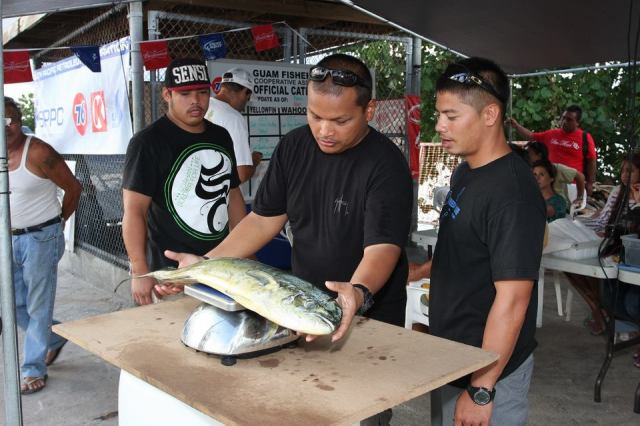 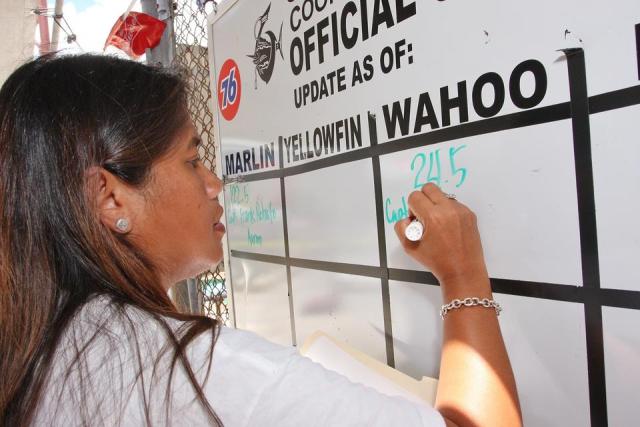