The BotCam is one of four types of fishery-independent survey gear used as part of the Pacific Islands Fisheries Science Center’s (PIFSC) Comparison of Fishery-Independent Methods to Sample Main Hawaiian Islands Bottomfish project. The BotCam was developed by Danny Merritt of the PIFSC Coral Reef Ecosystem Division and has been used extensively by Dr. Jeffery Drazen of the University of Hawai‘i as a tool to non-extractively survey Bottomfish assemblages in the Main Hawaiian Islands. 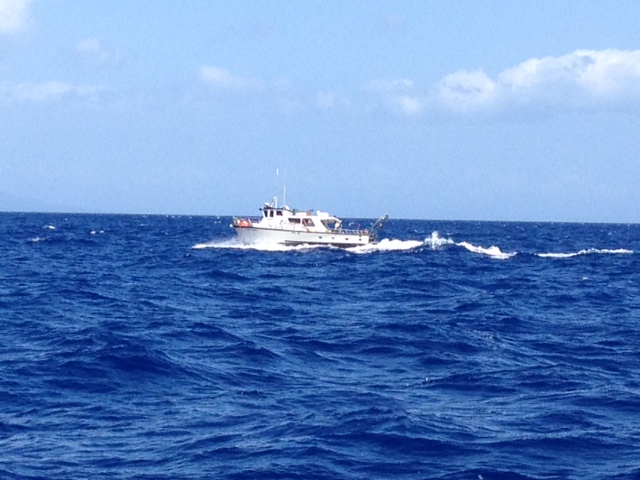 The 43’ R/V Huki Pono is serving as the platform for BotCam operations, operated by Captain Justin Nesbitt. The BotCam Research is led by Chris Demarke (University of Hawaii), along with student Volunteer BotCam Assistant Steve Matadobra (UH-MOP), and Science Operations Technicians Jamie Barlow and Eric Mooney (NOAA PIFSC). Jamie Barlow was the Operations Lead and Coordinator for the boat movements on SE-14-02; he would update each Captain, Observer, and Chief Scientist of operational plans for the next day; manage logistical needs of each vessel and update all parties if A) plans changed due to weather or B) other unforeseen events altered operations. The BotCam Team prepares and deploys up to 3 BotCams in each pre-selected sampling grid to depths between 100-300 meters. Each BotCam unit is equipped with monochrome ambient light stereo video cameras and a temperature and depth sensor, which are powered by battery and recorded in a DVR hard drive encased in an aluminum housing rated to 1000 meters.

The gear deployed off the Huki Pono was intended to be dropped in the same grids that were fished by fisherman. Meaning a sub-set of grids fished, were surveyed with the BotCam; and a subset of both methods were surveyed by the AUV. Due to the vast areas worked, weather constraints and logistics, the BotCam team often worked in close proximity to the fisherman sampling. The Huki Pono would start its day around 0615 and return around 1730. During a normal operational day the team would deploy 12-18 cameras and transit 35-60 miles round trip.

Back in the lab, the video data collected by BotCam will be analyzed to provide species identification, species maximum number, and species sizes. This information can then be compared with data gathered from the Autonomus Underwater Vehicle (AUV) and fishing catches in the same area. This research examines how non-invasive tools can be used as a valid means to assess the bottom-fish stocks. The Deep-7 Bottomfish include, Hapu’upu’u (Hypothodus quernus), Onaga (Etelis coruscans), Ehu (Etelis carbunculus), Opakapaka (Pristipomoides filamentosus), Kalekale (Pristipomoides sieboldii), Gindai (Pristipomoides zonatus), and Lehi (Aphareus rutilans).