Boy Scout Troops of Guam get a personal tour of the NOAA Ship Oscar Elton Sette by scientists and crew.

Boy Scouts troops 15, 20, & 23 all represented pier side in front of the NOAA Ship Oscar Elton Sette.

On July 23, 2014 during the Guam in-port, the NOAA Ship Oscar Elton Sette invited three Boy Scout troops to tour the ship and learn about the current fisheries science research that is happening around Guam and the Commonwealth of the Northern Marianas Islands.  The Boy Scouts toured several places on the ship including, the bridge and navigation plotting chart area, standard berthing quarters, galley, and deck department areas which utilize the winches and cranes.  Scientific research areas such as, the electronics lab, water chemistry lab, and wet lab were also toured by the visiting scouts. 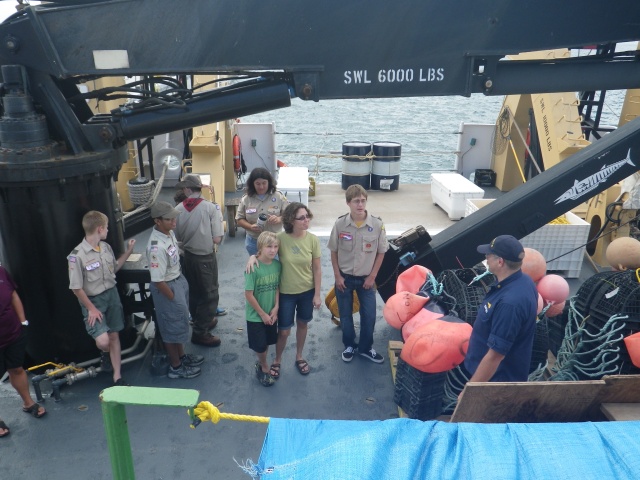 PIFSC Science Operations scientist, Eric Cruz, talked about current research and the research projects the ship was about to embark upon around Guam and off-shore banks.  Recently caught fish were put on display in the wet lab for the scouts to look at as well as, otoliths and pictures of other fish that are typically caught around Guam.  Age, growth, and maturity of fish, is a primary focus of research for Cruise SE-14-05.

Eric Cruz pries open fish jaws so the scouts can see the large sharp teeth of this predatory fish. 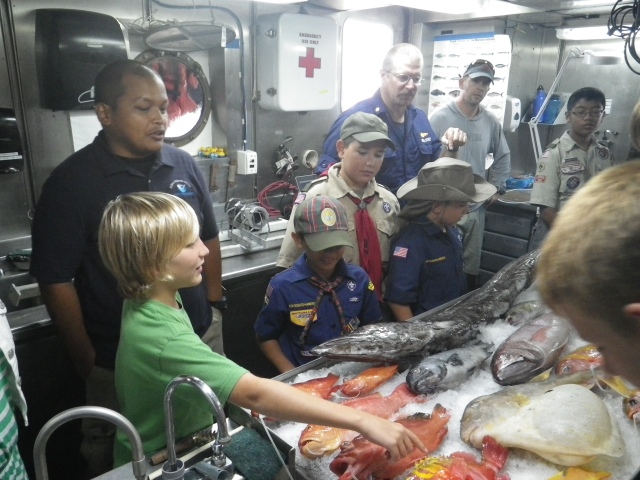 Eric Cruz explains to the scouts about the value of understanding the life history of fish in order to properly manage fish stocks.