Why do coral reef ecosystems thrive in remote areas of the Pacific Ocean?

by Jamison Gove and Amanda Dillon

The thousands of coral reef islands and atolls found across the Pacific Ocean are predominately surrounded by a biologically barren oceanic landscape. Paradoxically, the nearshore marine ecosystems around these islands and atolls are teeming with an abundance of reef fish, healthy corals, and other marine species. 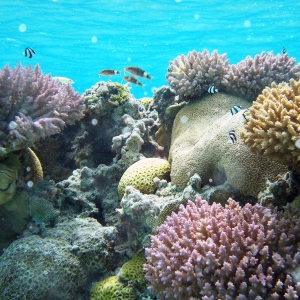 Led by Jamison Gove of the PIFSC Ecosystems and Oceanography Program, an international team of scientists from NOAA, Joint Institute for Marine and Atmospheric Research, University of Hawaiʻi at Mānoa, National Geographic Society, Scripps Institution of Oceanography, and Bangor University published a study in Nature Communications that provides the first broad-scale investigation of this paradoxical increase in productivity near coral reef islands and atolls—known as the “Island Mass Effect.”

Although observations of the paradoxical increase in biological productivity near coral reef islands and atolls date back to Charles Darwin nearly 200 years ago, the Island Mass Effect was first described by Maxwell S. Doty and colleagues in 1959 as a phenomenon in which the growth of phytoplankton is enhanced close to island-reef ecosystems. Until now, all studies trying to explain the reasons for the Island Mass Effect have been done over small, geographically-confined areas, such as a single island or coral reef group. As such, scientists have known very little about the prevalence, geographic variability, and drivers of this perplexing but ecologically important phenomenon.

In order to investigate the Island Mass Effect on a large scale, we studied 35 coral reef islands and atolls in the Pacific, using satellite imagery and ship-based surveys to assess the distribution of chlorophyll and accumulation of phytoplankton. We discovered that phytoplankton biomass increased at nearly all of the nearshore survey locations, resulting in biological “hotspots” in otherwise barren, tropical waters.

We further discovered that the strength of the Island Mass Effect varied between island ecosystems, and that island type, sea-floor slope, reef area, and human habitation are the primary causes or drivers of increased phytoplankton. Overall, our team found that the Island Mass Effect enhances phytoplankton biomass in most (86 percent) offshore ocean conditions, providing increased food resources for higher trophic groups such as tuna and dolphins.

Although increased phytoplankton is often beneficial for these coral reef ecosystems, it can also lead to toxic algal blooms, increased fleshy (non-reef building) algal growth and other negative impacts when associated with human activities. The ability to discern human-versus natural-driven changes in phytoplankton biomass is of great scientific interest and has important resource management implications.

That humans can artificially elevate phytoplankton biomass—around entire islands—provides important context for the impact of human activities on nearshore marine ecosystems. These reef ecosystems support human populations through food production and employment opportunities from fisheries and tourism, as well as coastal protection.

Now, our goal is to better understand these impacts and their influence on nearshore phytoplankton production. The Island Mass Effect will continue to be an important phenomenon, especially for island nations, in developing effective strategies to address future changes in climate and the global ocean.

Sarigan Island in the Commonwealth of the Northern Mariana Islands

The study was featured in numerous online news articles: