Five million… that number has a pleasant vastness to it. Five million of anything seems overwhelming. Try to picture five million fish. Start small and keep expanding. How would that look? Would they be one compact bait ball of iridescent shapes or a colorful patch work of reef fish schooling together? Well, it would take years to count that high and yet here we stand (or swim) just a few thousand fish away from reaching this landmark.

Image 1: A school of Big Eye Jack (Caranx sexfasciatus) trail behind a towed diver during a survey. Photo by Kevin Lino 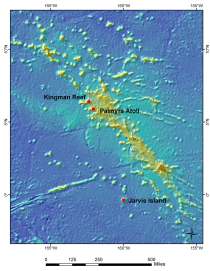 For the PIFSC Coral Reef Ecosystem Division (CRED) fish team, it has taken 15 years of dedicated hard work under the ocean’s surface to get to this point. This happens as our team collects visual census data on reef fish populations throughout the US-affiliated Pacific Islands. As part of the Pacific Reef Monitoring and Assessment Program (RAMP) these surveys support the National Coral Reef Monitoring Program (NCRMP). The goal of our research missions is to conduct integrated, consistent, and comparable monitoring of coral reefs across all regions while assessing and detecting change in natural resources. This is true around large inhabited islands like Tutuila in American Samoa, where we recently completed surveys, well as the tiny remote atolls in the Line Islands chain where we are currently working.

To date, the division has counted 4,890,980 fish throughout our survey areas using several methods. While it is hard to know which method will be used to count the five millionth fish, our primary surveys are conducted by stationary point count (SPC) divers who use a transect line along the seafloor counting every species in that area. Another team is towed behind a small boat counting the larger (over 50 cm) more mobile species– circumnavigating the islands and covering up to 15km each day. Odds are in the favor of the SPC diver to get the count with one of the smaller species that school in their many of thousands, quite likely a cute little 3 cm Chromis vanderbilti. Either way, it is a major landmark for our program and we look forward to seeing which lucky diver will count that fish. 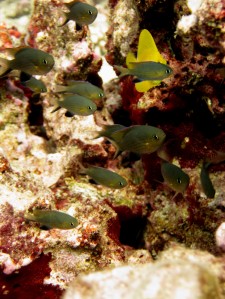 Image 5: A small school of Chromis vanderbilti huddle near the seafloor. Photo by Kevin Lino

Our first stop, Jarvis Island, is one of the most pristine reef environments I have ever seen. In the waters surrounding the mostly barren sands above, is a flourishing ecosystem partially driven by upwelling of cold and nutrient rich water from deeper in the ocean. In such productive waters, tens or even hundreds of large sharks, jacks, and manta rays are likely to appear alongside our divers the moment they enter the water. Just off the bottom, the real work begins as thousands of anthias, chromis, and other small species abound in the rugose benthos of healthy corals and algae. After six days at Jarvis, we voyage north toward the masses of fish at Palmyra Atoll and Kingman Reef for the last 12 days of surveys. Both of these remote areas are also quite unique, hosting an abundance of biodiversity to keep divers busy, while getting closer to that fortunate five millionth fish.

We are grateful for the nearly 80 scientists who have worked together to get us this far. One of whom has counted nearly 500,000 more fish than her next highest counterpart. In the last decade working with CRED, Paula Ayotte has rarely missed an opportunity to go to sea and spend hours underwater during these missions. If we had a Hall of Fame, she would be inducted unanimously for so many reasons: not only for counting nearly a million fish on her own, but also for making sure all other divers are trained, and mostly for being the most entertaining dive buddy you could hope for. It has been a pleasure working with her for that time and while it would be nice to be the diver to count the 5,000,000 fish… I’m hoping that Paula gets that count with a three meter manta ray at Jarvis.

Image 6: A Giant Manta (Manta birostris) curiously swims over a diver during a survey. Photo by Kevin Lino

Image 7: Diver Paula Ayotte amongst a healthy school of Whitebar Surgeonfish (Acanthurus leucopareius) and Convict Tang (A. triostegus) while conducting an SPC dive.