This month the Cetacean Research Program at PIFSC has been surveying the waters around the main Hawaiian Islands to better understand the population structure and abundance of a variety of whale and dolphin species.   We’ve brought along a number of technologies to detect, measure, and track cetaceans and call our effort “HI-TEC”, or Hawaiian Islands- Technology for the Ecology of Cetaceans, 2016. Among the most exciting encounters have been three sightings of killer whales, which are relatively infrequent visitors to the Hawaiian Islands.  They are spotted by recreational boaters every now and then, and their appearance usually makes the news.  NMFS cetacean surveys of the Hawaiian Archipelago have encountered killer whales only four times since 2002, and our research partners have seen them only a handful of times more.

Many people best know killer whales from the populations along the west coasts of the US and Canada.  Killer whales in Hawaii are distinct from those along the west coast of North America in that they have a comparatively narrow and dull colored saddle patch (the patch of gray shading behind and below their dorsal fin).  Killer whales in Hawaii have been observed feeding on other marine mammals, as well as on cephalopods (octopus and squid), somewhat unique relative to other populations that feed exclusively on either fish or mammals.  These observations suggest that Hawaii’s killer whales may have a more general diet than that documented for coastal temperate populations.  A review of all known killer whale sightings in Hawaiian waters from 1994 to 2004, combined with more recent sightings, indicates that killer whales may be present in Hawaii at any time of year. 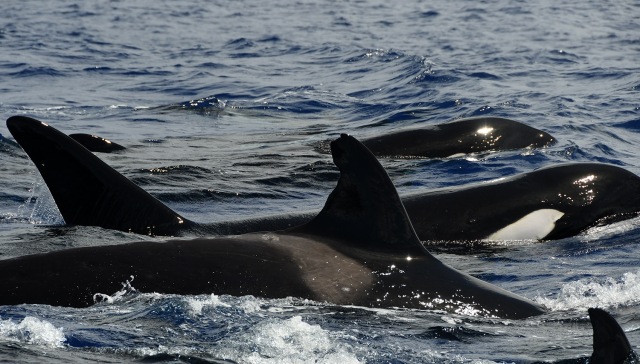 Killer whales lined up for their photograph. Individuals can be identified by the shape of and nicks on their dorsal fin, as well as by the shape and coloration of the saddle patch. Photo by Adam Ü.

Over the past two weeks, we found killer whales off the north side of Maui on July 13, off the southern Kona coast of the Big Island on July 16, and again off central Kona while working with our partners from Cascadia Research on July 21.  The two encounters off the Big Island were of the same group, while the group seen off Maui was different, distinguished by the shape of and nicks on their dorsal fins and the shape and coloration of the saddle patches.  Although our previous experience with killer whales in Hawaii has been that they are skittish and rarely stay around long enough for even identification photographs, all three encounters this month were extraordinarily productive.  We were able to collect small tissue samples (or biopsies) from all 5 whales seen off the Big Island, a significant increase in biopsy sample size for killer whales around Hawaii.  The biopsy samples will be used to understand how these killer whales relate to others throughout the Pacific, and can also contribute to foraging and contaminant studies.

We were also able to deploy two satellite tags during our last encounter, which will allow us to understand where else these animals spend their time.  Satellite tags have been previously deployed on one group of killer whales in Hawaii in November 2013 by Cascadia Research.  Those animals traveled halfway to the Marshall Islands before the tag stopped transmitting.  So far, our tagged whales have headed northeast, and are currently about 100 miles northeast of Maui. 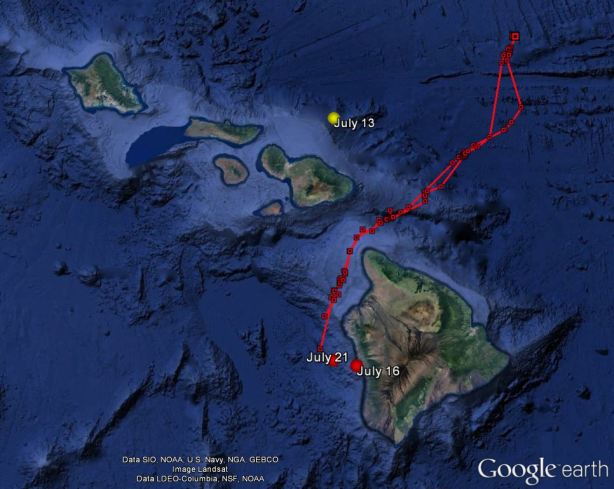 Sighting locations and satellite tag track from killer whales encountered during HI-TEC 2016. Identification photographs reveal two different groups were seen, one shown in yellow and the other in red. The track heading northeast shows the first 3 days of movement.

During this survey effort, we’ve brought along a new tool: an APH-22 hexacopter that we’re testing for determining the size of dolphin groups and assessing the size and condition of individual animals within those groups.  This hexacopter work has been a partnership with the Cetacean Health and Life History Program at the Southwest Fisheries Science Center (SWFSC) and has yielded some amazing images this trip.  During the July 16th encounter with killer whales, the hexacopter team was able to capture some beautiful images, rounding out three incredible encounters with this rarely seen species. 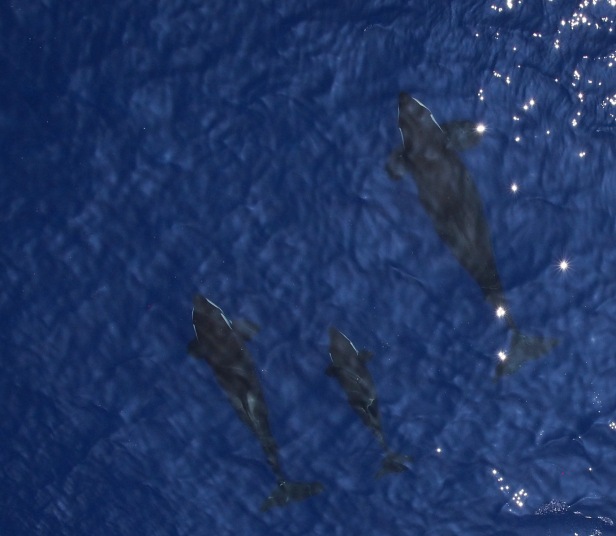 Aerial image of killer whales seen off southern Kona on July 16. These types of images allow us to assess animal size and body condition. The large female on the right and the two juveniles on the left all appear robust and healthy. This image was taken from an APH-22 hexacopter hovering 100 feet above the whales and flown by our skillful pilot Jake Barbaro (SWFSC) and ground station operator Rory Driskell (PIFSC).

Overall, a rare opportunity to study killer whales has yielded about as much data as we could have hoped to collect: thousands of photographs, tissue samples for genetic analyses, satellite tags for movement studies, acoustic recordings of killer whale sounds, and aerial photographs for measuring individuals.  Success!  What a great week!