A Whale of a Week in Saipan: Dispatches from the Field

By Marie Hill and Amanda Bradford

It’s #WhaleWeek and a team of PIFSC scientists is on a mission to find endangered western North Pacific humpback whales off the coast of Saipan in the Commonwealth of the Northern Mariana Islands. Marie Hill, Amanda Bradford, Allan Ligon, and Adam Ü are using the vessel Sea Hunter captained by Benigno “Uncle Ben” Sablan for two weeks of humpback whale surveys. Here are their dispatches from the field so far…stay tuned for more!

After our late arrival on the 9th and a day of setting up on the 10th, we were excited for our first survey. Today turned out to be an amazing day!  Definitely a record breaker for a winter survey and ranked among good summer days. First, the conditions were excellent. We had a little bit of swell, but nothing that hampered our operations or visibility. We started out the morning with three humpback whales about ten minutes after leaving the boat channel. They were very close to the fringing reef. 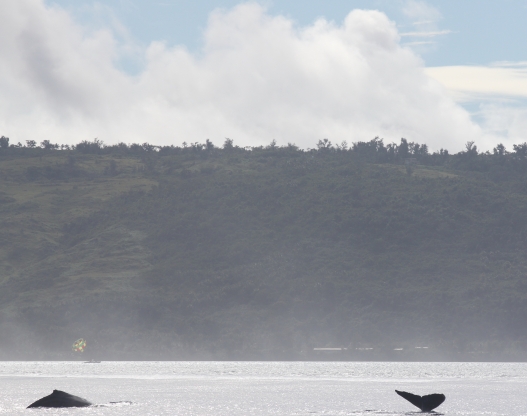 We made it up to Marpi Reef (about 10 nautical miles offshore) and spent the rest of the day there because that was the place to be! First, we were greeted by a group of spinner dolphins. Shortly after leaving the spinners, we saw blows from multiple humpbacks and headed over to work with them, but on the way we got distracted by short-finned pilot whales.

There were multiple subgroups, and we worked with a couple of them.  We deployed a satellite tag and collected a biopsy sample from the tagged individual.

During the pilot whale encounter, bottlenose dolphins showed up and then made occasional appearances throughout the rest of the day.

While on Marpi Reef, we encountered eight humpbacks (all adults), from which we collected four biopsy samples.

Bottlenose dolphins checked in with us regularly out at Marpi Reef. Photo: NOAA Fisheries/Marie Hill

We actually had to force ourselves to leave Marpi Reef so that we could make it back before dark. On our way back, we encountered another group of bottlenose dolphins and another group of spinners off the west side of Saipan. What a full and great day!

This morning started out nicely. The swell came up early (we were not expecting it until tonight or Monday), but the wind was really light. We encountered two humpbacks close to our first sighting yesterday. However, they were two (of the eight) individuals that we had seen yesterday at Marpi Reef; one of which we had biopsy sampled. We were able to collect more photos, but we didn’t get close enough to biopsy sample the other individual. The conditions came up much sooner than we expected, and we decided not to return to Marpi. A trifecta of swell, wind, and rain encouraged us to head in.

A small craft advisory, resulting from combined seas of 10-12 feet and 15-25 kt winds, has kept us off the water for the past couple of days.  Low visibility, resulting from rain, has prevented us from conducting shore surveys. We are spending our time working up the photos that we took during our first two days on the water.

Satellite tag track of a short-finned pilot whale tagged at Marpi Reef. The location where the whale was tagged is marked by a red dot.

All work was conducted under NMFS permit 15240 and CNMI DFW license no. 03564-17 issued to PIFSC. Funding was provided by U.S. Navy Commander, U.S. Pacific Fleet and PIFSC.