A scientific paper was recently published by Fisheries Research that describes an investigation of the sounds made by false killer whales near longline fishing gear and how these sounds relate to fishing activity and depredation. Depredation is the act of a marine mammal removing fish, either bait or target catch, from fishing gear. PIFSC scientist and lead author of the paper Ali Bayless describes the issue of depredation and how her team’s research is helping us to better understand how to reduce it.

Fishermen in Hawai‘i use a fishing technique known as “longline” that uses baited hooks targeting bigeye tuna attached at regular intervals along a main line that stretches for miles behind the boat. False killer whales are known to take tuna as well as bait from longlines at high rates in certain areas of the Pacific Ocean, a behavior known as depredation. This behavior can cause a whale to become hooked or entangled in fishing gear, which can lead to injury and even death of the animal. This type of unintentional injury and death (called bycatch) exceeded sustainable levels for the population of false killer whales in pelagic (offshore) waters of Hawai`i. The aim of our research is to better understand and ultimately reduce false killer whale depredation and bycatch.

Observations of false killer whales interacting with longline gear are limited since this activity mostly occurs underwater at depths between 40 and 100 meters.  However, false killer whales make specific sounds that are easily detected and identified, which makes acoustics (that is, the science of sound) a great way of determining whether these animals are present around longline fishing gear.  By monitoring these sounds, we can learn more about when and where whales interact with the gear in relation to specific fishing activities.

In order to monitor longline fishing sets for false killer whale sounds, a sturdy, light-weight acoustic recorder was needed that could be easily used by fishermen with minimal disruption to the fishing process.  We partnered with engineers at Scripps Institution of Oceanography in California to develop such a system, and the longline High-frequency Acoustic Recording Package (HARP) was born.  The HARP is made up of a hydrophone (underwater microphone) and a pressure case that houses a small computer set up to save all recorded sounds. The HARP can be easily attached directly to the main fishing line among branchlines with baited hooks as shown in the diagram below. 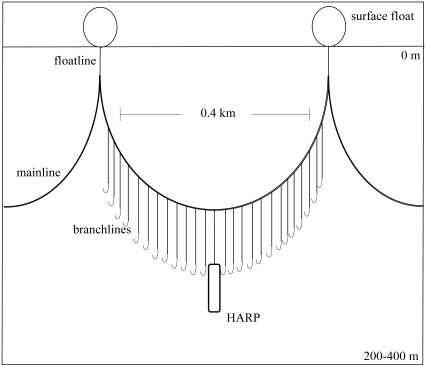 The fishing vessel Katy Mary was hired to complete a total of 6 fishing trips for this study and multiple HARPs were attached on each fishing set, spread across the length of the main fishing line.  With multiple HARPs, we were able to record sounds across an entire set and capture any false killer whale sounds within range of the recorders. 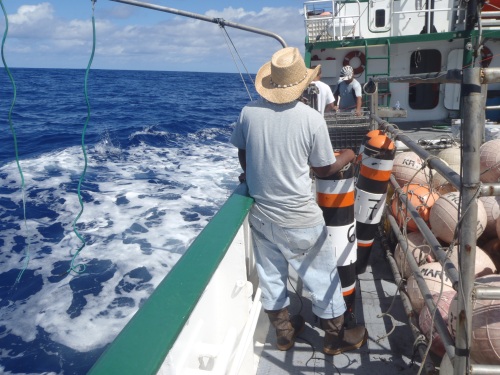 The number of false killer whale sound detections was highest during the hauling phase of fishing operations. Detections were either clicks, whistles, or a combination of both.

Movements of false killer whales along fishing lines were also investigated by looking at sound detections across multiple HARPs on a given set. We found that detections got sequentially farther away from the vessel during the haul, suggesting that the animals are aware of the vessel’s location and movement and have some motivation to stay ahead of the vessel.  This also supports the idea that there may be a sound cue related to the hauling of the gear that animals are reacting to.

False killer whale presence near fishing lines was also compared with depredation records for each set.  Only 3 of the 19 sets with false killer whale sound detections also showed signs of depredation, meaning there were visible signs of damage to hooked target fish. However, only catch depredation can be reliably determined by visual inspection of retrieved lines. It is possible that undetected bait depredation was also occurring and may be more prevalent than previously thought.

This novel approach to understanding how false killer whales interact with longline gear has provided an efficient and easy-to-use system for acoustic monitoring of the Hawai‘i longline fishery. This work is ongoing with deployments of HARPs on vessels across the fleet on a volunteer basis to further understand how and when these interactions are occurring.

False killer whales are highly social and form stable, long-term bonds. They even share food with each other. We hope our work leads to less of this food coming from longlines. Photo: NOAA Fisheries/Adam Ü

Many thanks to Jerry Ray (captain of the Katy Mary) and his crew, Josh Tucker and the PIRO Observer Program, and our collaborators at Scripps Institution of Oceanography. Funding for this research was provided by PIFSC, PIRO, the NMFS Take-Reduction and Bycatch Reduction Engineering Programs, the Marine Mammal Commission, and the National Fish and Wildlife Foundation.